Published in print and online at City on a Hill Press January 21, 2010 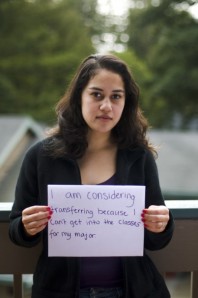 Most college students change their major at least once in their undergraduate years. Yoali Lamarque has changed hers twice in the two years since she came to UC Santa Cruz, but not for the reasons you might think.

One of the reasons she chose to attend UCSC was the community studies program.

“It just seemed like such a perfect fit for being a social worker,” Lamarque said. “But then, as I was telling people it was my major, it got cut.”

So she changed it to sociology.

However, as the budget got smaller so did the course catalogue, and Lamarque found herself struggling to get into even the introductory classes required to declare her major.

“Every quarter I would crash all the ones that were offered. … I’d spend like a week and a half in those classes hoping that someone would drop, and even bought the books, sometimes the reader,” she said. “For a year and now two quarters, I have not been able to get into a single sociology class…”