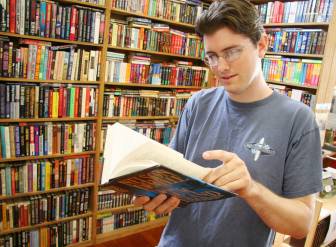 Originally published in print and online at The Auburn Journal Sept. 14, 2009

Auburn readers looking to save some cash are searching for cheap entertainment, and are finding it at local used bookstores.

James Van Eaton, owner and manager of Winston Smith Books Downtown, said that this is the first time in his experience that economic downturns have led to increased book sales.

In addition to some loyal regulars, Van Eaton said many readers who are feeling the pressure to cut expenses are skipping Borders and Barnes & Noble and coming into his store.

“We get a lot of people coming back, and coming by when they’re in town or in the state,” Van Eaton said. “But we’re also getting a lot of new customers who didn’t even know we were here.”

Van Eaton said many of his customers come in looking for mystery novels, but that books made popular by movies and media bring in a lot of traffic as well. Copies of Julia Child’s cookbooks flew off the shelves when the film “Julie & Julia” hit theaters, and Van Eaton expects “The Da Vinci Code” author Dan Brown’s books to be a big seller when the new Brown book is released on Sept. 15.

Over at A Book Haven, books that have been adapted for the big screen are selling fast as well. Owner Shelle Parsons said Audrey Niffenegger’s book “The Time Traveler’s Wife” has been one of the most requested this summer after the movie version was released… 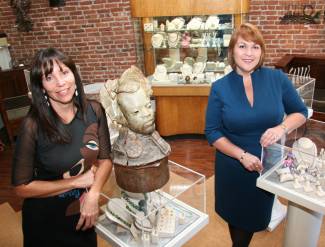 Published in print and online at The Auburn Journal September 20, 2009

Patricia Bradley’s art started as a hobby, but creating sculptures inspired by her heritage has quickly grown into a career for the Auburn resident.

Bradley began taking lessons at local studios. Soon after, her work was featured in the Auburn Artwalk. All proceeds were intended to benefit “HEART” (Health Education Africa Resource Team), a local organization dedicated to improving health and welfare in Africa.

“Sadly, I literally had not one sale,” Bradley said.

However, she was still determined to help. Over the course of two mission trips to Africa, Bradley helped thousands of Africans battle malaria. What she saw and experienced in Africa had an impact on her artwork as well.

“My work had taken on a tribal feel,” she said.

Bradley was encouraged by her niece, a fellow artist whose work focused on the family’s Native American heritage and works on the Tesuque reservation in Santa Fe, to get more involved with art and her heritage. Bolstered by their support, Bradley sent slides of her work to Santa Fe’s “Indian Market,” a juried art show and one of the largest events showcasing Native American art in the world.

“I was accepted, and off to Santa Fe and a sold-out show,” Bradley said. She just recently returned from her second year at the Indian Market, and already has her pieces for sale in several galleries.

“I am now showing in the Convergence Gallery on the plaza in Santa Fe, N.M.,” she said. “Every Native American artist’s dream.”

Bradley’s pieces are also on display in Lovett’s Gallery in Tulsa, Okla., and at the OZ Gallery here in Auburn. She uses a variety of mediums, including wax casting to create masks.

The masks and small sculptures on display now are part of a series entitles “Two Little Indian Girls.” Bradley says she has a studio in her Auburn home where she creates her pieces. She sells them in “triptychs,” sets of three.

Bradley said her recent work is “more Native American, more fantasy” inspired than her previous art. This focus on her heritage as a member of the Bad River Band of Lake Superior Chippewa is explained in a statement printed on fliers advertising her shows:

“I come from the lost generations of Native Americans. My father was part of the Native American Indian Assimilation Act. He was a proud member of the Ojibwa Nation but sadly he was removed from his family and homelands at an early age. He also got lost … Despite times of sadness we were a people of great joy and pride.”

Visit the OZ Gallery on Sacramento Street in Auburn to view or purchase Bradley’s work. 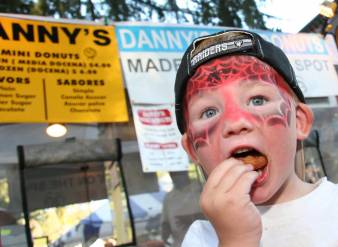 Published in print and online in The Auburn Journal September 10, 2009 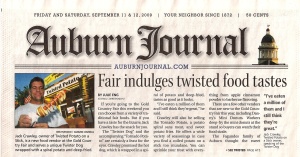 If you’re going to the Gold Country Fair this weekend you can choose from a variety of traditional fair foods. But if you have a taste for the bizarre, Jack Crawley has the snack for you.

The “Twister Dog” and the accompanying “Tornado Potato” are certainly a feast for the eyes. Crawley promised the hot dog, which is wrapped in a spiral of potato and deep-fried, tastes as good as it looks.

“I’ve eaten a million of them and I still think they’re great,” he said.

Crawley will also be selling the Tornado Potato, a potato spiral sans meat, and sweet potato fries. He offers a wide variety of seasonings in case you find a coiled potato on a stick too mundane. You can sprinkle your treat with everything from apple cinnamon powder to barbecue flavoring…

Published in print and online in City on a Hill Press’ summer magazine, Primer

Every good college student knows that a coffee shop serves up more than just coffee. A good coffee house is a place to study, to spend long hours reading, and to hang out with friends. When your roommate has driven you just crazy enough that you have to get out of the dorm, or you’re going on your 23rd hour in the library, the local coffee joint can provide a nice change of pace and a much-needed caffeine boost. We’ve got the goods on where to go in Santa Cruz to find delicious and affordable coffee, a great atmosphere and most importantly, free Wi-Fi…

Published in print and online at City on a Hill Press February 25, 2010

If you’ve ever seen Edward Sharpe and the Magnetic Zeros perform, you might already have an idea of what it was like to interview singer Jade Castrinos. Her answers sound as if she’s thinking them for the first time, strung together to the point that they don’t really seem like sentences at all.

I welcomed a chance for Jade to open up about herself and the band beyond the songs they sing. I spoke to her over the phone as they geared up for their first major tour, on which Santa Cruz is the second stop. By the end of our conversation, the only thing Jade seemed sure about was that she was very excited about the trees. As for me, I knew that Jade’s eccentricity could definitely be described as magnetic.

City on a Hill Press: So I just read a review that described your group as more of a ‘traveling vagabond family’ than a typical band. Is that accurate?

Jade Castrinos: I mean, that’s a part of it, but that’s not the whole thing — we’re definitely a band and gather around the purpose of music. But the family idea, it’s kind of the lifeblood of the whole thing. Like the song ‘Home,’ that’s Alex [Ebert, the lead singer] and I just professing our love for each other as best buds. But we are like siblings, so there is definitely a ‘vagabond family’ thing, yeah.

CHP: So with the large family/band-style group — there are at least 10 of you at each show — there have to be a lot of different ideas and influences. Has it been difficult to incorporate everyone’s input? How do you make that work?

CHP: Yeah, with the songs you guys write and perform.

JC: Well, everybody is a really talented musician. For the record, Alex had some ideas for songs, but everyone came in and played it, and it’s like, you play how you feel about the music — like, ‘What do you feel here?’ There’s no ‘Play it this way!’ It’s very … everyone’s involved.

CHP: And how would you categorize that music? The term ‘folk’ has been thrown around — does that fit your music and your group?

JC: I don’t know. (Laughs.) I mean — yeah, we’re definitely folk, but I don’t know — I always say our band category is happiness.

CHP: Can you tell me a little about the band’s name?

JC: Yeah, Alex wrote this novel, and the main character was Edward Sharpe, and he came to save the world but kept falling in love with girls, so he wasn’t completing his mission — I’m not sure I’m the one to ask about this, I might get it wrong but — (loud noise, Jade yells) — Wait, I completely lost track — what are we talking about? Could you repeat the question?

CHP: We were talking about the band’s name, and you were explaining about Alex’s novel.

JC: Oh yeah, yeah, he might be the best person to ask about this, but [the novel] is definitely reflected in our songs and the videos we’re doing.

CHP: What about your debut album? Tell me about writing and recording ‘Up From Below.’

JC: When we started, the guitar player Nico — we recorded at his house, he and Airin had a studio in their basement and we would record there and it was so magical. Nico’s girlfriend Becky would make the most amazing food and we’d just have dinner and jam every night and come up with great songs. It was all magical, but definitely the beginning … and definitely Becky’s cooking was a huge part.

CHP: So last question, then I’ll let you go. Your hippie-throwback vibe definitely has an audience in the students of UC Santa Cruz. Are you guys excited to play here, and do you have any expectations about the show?

JC: We’re totally excited to play there. I don’t know if we’ve played there before, but I’ve definitely driven through that area, it’s beautiful. Are there redwoods there?

JC: I love the forest! … We’re definitely excited to play there.

Edward Sharpe and the Magnetic Zeros will play on Monday, March 1 at the Rio Theatre. Show begins at 8 p.m. Advance tickets are available at Streetlight Records or online at www.ticketweb.com. Tickets are $18 in advance or $22 at the door.

All copyrights belong to their respective owners