Published in print and online at The Auburn Journal August 3, 2009 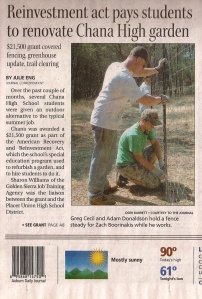 Over the past couple of months, several Chana High School students were given an outdoor alternative to the typical summer job.

Chana was awarded a $21,500 grant as part of the American Recovery and Reinvestment Act, which the school’s special education program used to refurbish a garden, and to hire students to do it.

“There were students there that have never had anything new, and listening to them get their paychecks and get excited about buying a new pair of shoes… it was really exciting seeing that, and sharing their excitement,” said Jeff Moore, Chana High School special education teacher. “That was the highlight for me.”

Sharon Williams of the Golden Sierra Job Training Agency acted as the liaison between the grant and the Placer Union High School District.

She explained that in order to qualify for employment paid by the grant, students had to have a low-income, disability, or other circumstances that might make it difficult for them to find a job. The students were paid minimum wage and supervised by Chana High teachers in rebuilding a greenhouse, re-fencing the garden, and clearing a trail to a picnic area and volleyball court.

Don Joye, project organizer and garden class teacher, was one of several Chana teachers who devoted their time this summer to working with the students. He looks forward to continuing the progress made over the summer with the agriculture program into the school year, and plans to add goats and lambs to their farm area.

Joye hopes the students will be able to expand their agricultural education to include working with the animals and learning about their care and use. Chana is one of a few Auburn-area schools that have student gardens and agriculture classes to educate students about farming and growing their own food.

Those who farm for a living in Placer County are often vocal about supporting agricultural education in schools.

“School gardens and school farms are an excellent way for students to learn about where their food comes from, to and gain some respect for local farmers,” said Karen Killebrew, president of PlacerGrown, when asked about the project.

Of the five students who stuck it out for the entire six weeks, Samual Perry and Brent Freeman will be returning to Chana in the fall to enjoy the fruits of their labor. Among them is a beach volleyball court, which teacher Tad Eichman and the students stumbled across while clearing the area of debris. Eichman, who has worked at the school for 11 years, said he had no idea the court was there, but it has made a great addition to the picnic area.

Teachers noticed the students seemed to take pride in their work.

“It was a great thing for the students to be involved in,” Eichman said. “They really enjoyed being outside, and working in the garden reached the students in ways school sometimes can’t.”

Chana educators agreed that project organizer Joye was a key player in making the project successful.

“It really touched the students to make that connection, to have an inspiration,” said Randi Sindt, special education teacher. “A lot of the boys looked up to Don.”

It was “extremely gratifying”to see the program he had been advocating for years receive funding and have an impact on his students, Joy said.

“It rejuvenated the entire agricultural education program,” Eichman said. “When school starts again in August, I think the students will be pleased and surprised with what we’ve started.”

Originally published in print and online at The Auburn Journal.