Students Can Opt Out of President’s Talk

Published in print and online at The Auburn Journal September 9, 2009 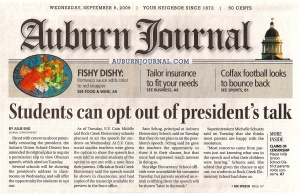 Faced with concerns about potentially censoring the president, the Auburn Union School District has amended its original plan to require a permission slip to view Obama’s speech, which aired on Tuesday.

Several schools will be showing the president’s address in classrooms on Wednesday, and will offer the opportunity for students to opt out.

As of Tuesday, E.V. Cain Middle and Rock Creek Elementary schools planned to air the speech for students on Wednesday. At E.V. Cain, social studies teachers were given the option to show the speech but were told to remind students of the option to opt out with a note from their parents. Officials at Rock Creek Elementary said the speech would be shown in classrooms, and had copies of the transcript available for preview in the front office.

Sam Schug, principal at Auburn Elementary School, said on Tuesday they do not plan to air the president’s speech. Schug said he gave the teachers the opportunity to show it in their classes, but that none had expressed much interest in doing so.

Skyridge Elementary School officials were unavailable for comment Tuesday, but parents received an e-mail notifying them the speech will be shown “later in the week.”

Superintendent Michelle Schuetz said on Tuesday that she thinks most parents are happy with the resolution.

“Most concerns came from parents just not knowing what was in the speech and what their children were hearing,” Schuetz said. She added that given the chance to opt out, no students at Rock Creek Elementary School had done so.

Brad Kearns, father of two students in the Auburn Union School District, said he was glad the school board changed its initial plan, but is somewhat disappointed with the outcome.

“The speech was on live during school hours so people could gather,” Kearns said. “I’m glad they’re playing the tape, but some of the magic of gathering together and watching it is lost…”