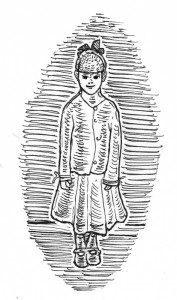 Published in print and online at City on a Hill Press November 18, 2010

Walking With A Ghost

“You know how when someone stands close to you, you can feel it? It’s like that. Or it’s a static energy-type feeling, that’s what makes your hair stand up,” Nancy Bowmen described.

The co-founder of Paranormal Zone TV (PZTV) is certainly qualified to describe the presence of a ghost. Since she predicted her father’s death at the age of nine, Bowmen has had numerous experiences with paranormal entities, including witnessing two full-body apparitions and developing a personal relationship with Sarah Logan of the Brookdale Lodge, one of Santa Cruz’s most famous ghosts.

For Bowmen, investigating supernatural activities is not just a job but a deeply rooted passion that is evident in her willingness to express her belief in ghosts with an emphatic “yes.” Her interest can be traced back to a paranormal incident from her childhood.

“I was sitting on the lawn with a girlfriend and I was picking at the grass — but you know, when you’re … doing something mundane, and you kind of go blank in your mind?” Bowmen said. “In a heartbeat I got this little message. I couldn’t hear a voice but it was like a message, telepathically, saying, ‘Your father is going to die.’ And a week later, he passed away. I really think it was what you would call your guide which prepared me. I looked at my girlfriend and told her, ‘My dad’s gonna die. My dad’s gonna die…’”