Published in print and online at City on a Hill Press September 23, 2010 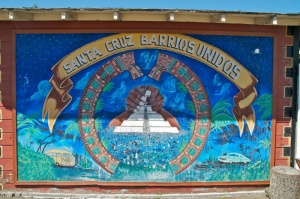 Daniel “Nane” Alejandrez does not pretend to be perfect. Thirty-three years after founding the now nationwide nonprofit Barrios Unidos, Alejandrez speaks openly and frankly about his own battles with violence and addiction. He bears the scars and tattoos of a former gang member and a former drug addict, and the roomy fit of his dark jeans and buttoned-up short-sleeved shirt make no apologies for who he is, who he has been and who his people are. He is proud of his heritage as a member of the Latino community, and he would fit in just as comfortably were he sitting at a picnic table at a backyard barbecue with friends and family instead of in his office.

Perhaps it is because he is so honest about his past — in his words and in his appearance — that he is able to convince so many people, young and old, to choose a path of nonviolence.

Speaking from his Santa Cruz office, Alejandrez tells the story of Barrios Unidos (BU) and the thousands of men and women whose lives it has changed. The organization is devoted to preventing youth violence by providing young people with  alternative opportunities to survive and succeed…