Published in print and online at City on a Hill Press May 6, 2010 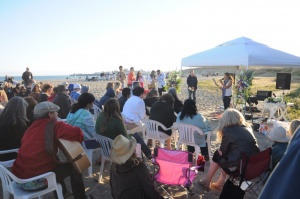 As families picnicked nearby, mourners gathered to remember Santa Cruz resident Erik Lippmann. Lippmann was reported missing on April 21, and after a week of intensive search efforts by members of the community, he was found dead at Marina State Beach.

UC Santa Cruz students will remember seeing the fliers posted around campus and the Facebook group devoted to finding Lippmann popping up in their news feeds as their friends joined. Word of the missing 30-year-old autistic man and the search to find him spread quickly over the eight days since his disappearance, largely due to social networking. The Facebook group grew to almost 6,000 members, some participating in search efforts and others just showing support, most of whom had never met Lippmann…